Are You Disappearing In Your Relationship? 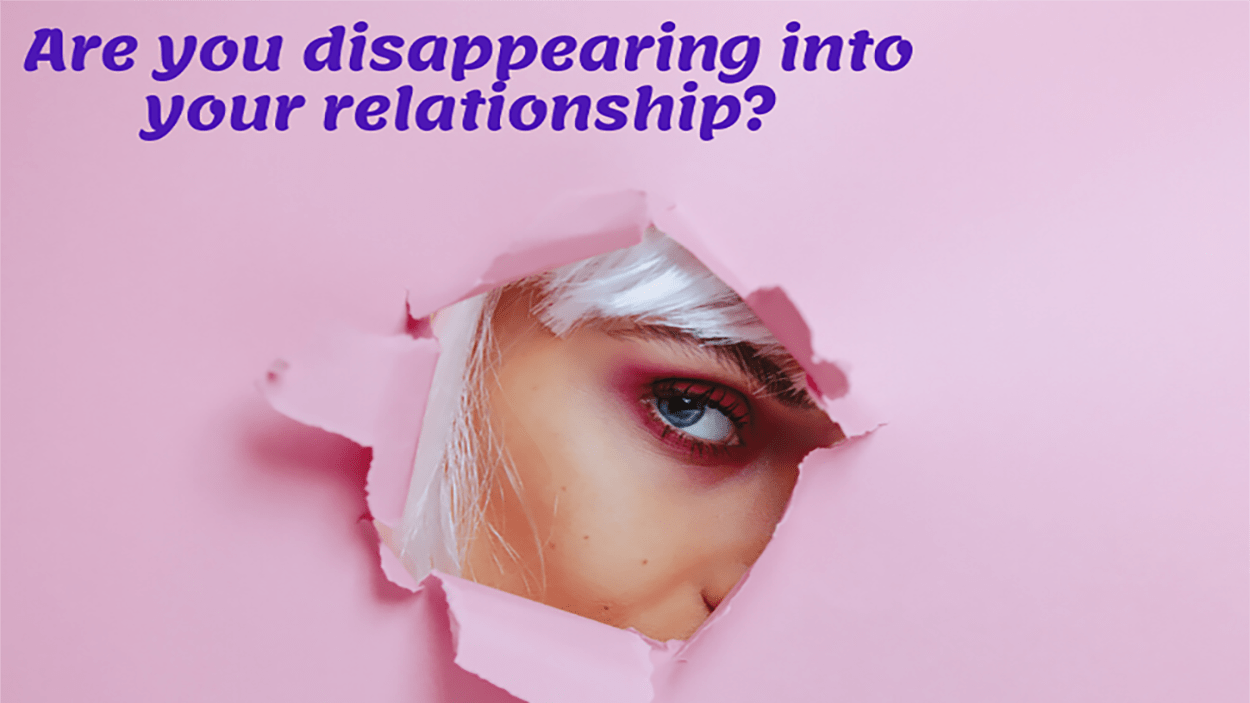 Are you disappearing into your relationship?

Relationships offer a wonderful gift for growth and learning to love our self and our significant other without condition. But too often we forget about our self, our needs, wants and desires. We can get up wrapped up in love.

No matter how successful, or powerful some women are, they give up parts of themselves. Like their social life, their time alone, even their beliefs and values, or spiritual development. They don’t tend to voice their needs, or desires and wants easily. So, they end up on hold or forgotten.

You may think there are many reasons you maybe knowingly hiding yourself. For example you may consciously avoid arguments for fear  of confrontation. A fear learnt from the way your parents fought a lot.

However, the underlying reasons we make ourselves invisible, or merge into our partner’s world, is largely an unconscious act. Which over time our personal needs and desires wane, where they no longer are important. They become like a distant dream we once believed was possible, but are now less important or completely forgotten.

Childhood trauma greatly impacts on our ability to feeling empowered in relationships.

How we show up in all of our relationships is a reflection on what we learnt about inter-personal relationships when growing up. Trauma experienced in childhood greatly impacts on our ability to maintain a sense of self awareness and feeling empowered in relationships.

Unhealed trauma does not form a sound basis on which a healthy relationship can develop. By that I mean, a relationship in which you feel wholly loved just for who you are.  It’s easy for relationships to slide into disrepair, when one or both partners are unconsciously holding onto past hurts that are buried deep within the emotional body and the physical body.

So what did you learn from your parents?

Did you learn to be independent and to value who you are? Was our voice heard?

Were you treated as equally important as your siblings, especially with the males in the family?

Were you taught to speak up and to voice your needs and wants and not made to feel selfish in doing so?

Did mum and dad treat each other as equals?

Or did mum play the peace keeper role to avoid conflict at any cost?

Sophie 38, explained to me that she was raised to believe that the only way to obtain any significance was to marry a wealthy man. As a result Sophie thought the only way therefore, she could develop her own sense of self worth; would be through supporting her husbands accomplishments.

In other words, Sophie’s needs would be met by satisfying her partner’s wants. She came to believe her needs as a woman, were not so important.

And that’s exactly what happened. She met and married a very successful businessman. At first it seemed it just what Sophie had wanted. People paid her respect. She felt important. She felt significant for the first time in her life.

But after some years she began to realise just how empty and lonely her life really was. Her entire world had been centered around pleasing her husband.

She made a point, which she obsessed over for fear of criticism, to alway look good for him. Sophie was intent on not letting him down.

Appearances was something her husband was fanatic about. So much of Sophies time was also spent on maintaining an immaculate home for him to come home to.

Sophie woke up to the disarming truth that over the years she had allowed herself to disappear.

She did not know who she was. The real shock though came after the divorce in not knowing how to simply live her life for herself.

She was so conditioned to ignoring her own needs as a matter of course, it was difficult for Sophie to literally even think for herself.

She really had no idea of how to connect to Sophie. It took some time however, to bring out the real Sophie. Especially where she learnt to feel good about taking care of her own needs.

The biggest hurdle was for her to get to know what it felt like to experience feeling empowered and unafraid in getting her new life off the ground. But now that Sophie does know what it feels like, she is determined never to disappear again.

Her road ‘to recovery’ is now filled with conscious acts of self love.  But she has now discovered a happy, joyful, adventurous Sophie she never knew before.

Our biggest challenge is learning to put our self-first in a self-loving way and not feel guilty.

For those of us that find ourselves disappearing into a relationship, our biggest challenge is learning to put our self-first in a self-loving way. This is not a selfish act. It is the most important change you can make. To love oneself is a precious gift that we should all fully embrace.

When you reflect on your relationships past and present– who showed up? Who is showing up today?

Here are 10 signs which can indicate you may be hiding in your relationship.

2. Forgoing your own needs and interests, putting your partner’s first

3. Finding comfort in food or alcohol

4. Waking up in the morning tired, restless, anxious, insecure

6. Always trying to fit in

7. Prefer to be at work than at home, or a workaholic

8. Make excuses by ignoring your feelings

How much of yourself do you allow to show up in your relationships?

Let me leave these thoughts with you…

How much of your relationship is a reflection of your true self?

Do you make a point of being fully present no matter what is occurring?

Or do you pull back, retreat and hide?

In other words, is your relationship filled with your presence each day? Does the real you tend to show up?

Or are you hiding parts of yourself in there somewhere?

If you feel like you are on your way to disappearing, or feel you have already disappeared and you want to explore how you can get back the real you, I like to offer you a 'no obligation' breakthrough session. Which you can book here.

This site uses Akismet to reduce spam. Learn how your comment data is processed.